Once home to the Rapa Nui people, Easter Island is known throughout the world for its massive stone busts, or maoi that dot the island as sentinels of a lost culture. These maoi were made from volcanic rock by a Polynesian culture of uncertain origins. It has been speculated that they arrived on Easter Island, which is 5.5 hours by air from the nearest landmass, from a westward point of origin. The nearest westward island to Easter Island is Tahiti, and it is over 3 200 km away.

Experts differ in their estimates of when the Rapa Nui people arrived on Easter Island; and their guesses range from several hundred years ago to a thousand years ago. When they first arrived, the island was forested, most notably with a kind of palm tree that could be used for lumber, cloth, and rope. During their initial settlement period, there was plenty of food and resources, and the islanders built many maoi. Then deforestation and slave traders started to raid the island and the culture dwindled. Today, there are few people with ties to the original population, yet the maoi remain.

The best time to visit Easter Island is from December to March. Because this is south of the equator, this is the island's summertime, but the island does not get too hot, and the temperature hovers around the mid-eighties. Part of Chile, many people choose to arrive on Easter Island through Santiago, although there are flights from other countries in South America as well as from Tahiti. Arriving on the island, you pay a fee for visiting Rapa Nui National Park that entitles you to visit multiple sites in the park for a five day period.

While on Easter Island, you may want to rent a vehicle. With a vehicle, you can travel the entire island in a few hours, but other options include bicycles and guided tours. There are hundreds of maoi all over the island, some have been placed on ceremonial platforms called ahu that should not be disturbed.

Maoi were all quarried from a volcanic crater called Rano Raraku, and this makes a great hike. Once you get up to the rim of the crater, you will see the area is littered with half-completed maoi. During the nadir of the Rapa Nui people, a Birdman Cult developed that was centred on another volcanic crater and its neighbouring village of Orongo. The Birdman Cult originated in the 19th Century, and individuals from the island would scale the cliffs down to the sea, swim the waters to a neighbouring islet and retrieve an egg from the nest of a sooty tern there. The challenge was to return with the unbroken egg in return for a life of privilege for a year. Petroglyphs carved into the rim of the crater commemorate the success of different Birdmen since the advent of the Cult. 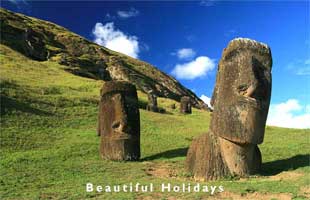 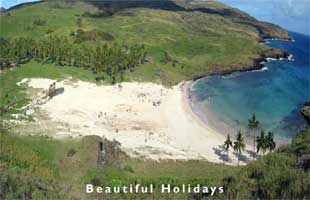 There are some beaches at Easter Island that are quite beautiful. Anakena is a nice, white sand beach with nearby maoi, while for those with a taste for a more secluded venue may want to visit Ahu Akahanga which is another beach surrounded by cliffs. For those who are interested, they can snorkel or scuba around the islets of Moto Nui and Moto Iti. There are outfitters nearby where travellers can both rent gear and arrange for a guided tour.

Easter Island provides a wonderful opportunity for visitors to see the enigmatic maoi. Most people have seen photographs of these busts that dot the landscape of Easter Island, but nothing can compare to encountering them yourself in volcanic crater. The island is remote, and although tourism is its main industry, the way these statues are scattered throughout the island mean that visitors do not have to deal with crowds when viewing these unique monuments.

To support our free travel guide to Easter Island please take a look at the accommodation options offered below. You can compare rates across multiple travel sites and get the best deals for your trip: